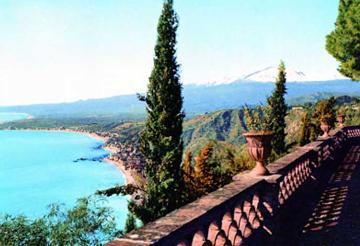 Presenting the Villas Worldwide range of private villas with pools in Sicily, Italy. Holiday homes to rent for self-catering family holidays as well as nice secluded properties which appeal to couples for a romantic stay, even a honeymoon. A hand-picked selection of beautiful holiday villas and cottages in outstanding locations, many with fabulous sea views and with easy access to the wonderful coastline of Sicily. A vacation in one of our Sicily villas represents excellent value for money and a holiday you, like many of our satisfied clients, will want to repeat. Ask our experts for assistance choosing the property to match your criteria.

Sicily is a dazzling island on a crossroads in the Mediterranean, between Africa and Europe, yet belonging to neither. Occupied at some point by half the ancient civilised world it has a varied heritage like no other and even today remains a quirky mixture in most aspects of its language, customs, cooking, art and architecture. 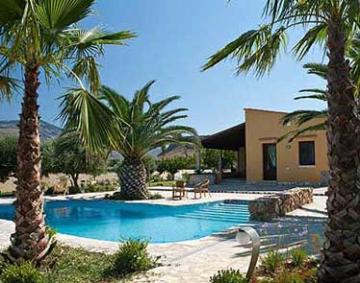 There is much to discover and enjoy on the island with many sights and attractions in Sicily of exceptional beauty such as the Greek theatre at Taormina which overlooks the active volcano Mount Etna in the background. The valley of the temples ranks as one of the most impressive conglomerations of Greek temples. Palermo is an interesting city to explore with architecture ranging from Arabic to Norman, Baroque and Art Nouveau.

The music scene in Sicily is nicely varied, it has the most vibrant Jazz scene in Italy, centred on Palermo where native Sicilian music has been fused with Arab and American influences. Traditional music includes lullabies, dance, festival music and epic storytelling. There are numerous venues around the island's nine provinces. See more about Sicily holiday events and what to see and do in our more Sicily information section.

There are frequent low-cost flights to Palermo (PMO), Catania Fontanarossa (CTA) from the UK, Easyjet and Ryanair are two of the operators. You can also fly to Trapani Birgi airport (TPS). Most of our Sicilian villas are within a three-quarter of an hour's drive of Palermo. For transfers from the airport, we recommend marsalatransfer.com

The island enjoys a wonderful “Mediterranean” climate characterised by hot dry summers and mild winters with light rainfall. The summer seems long due to warm temperatures and long hours of sunlight. A lack of frost allows the production of an abundance of citrus fruits, olives, watermelons and grapes. However, the high mountains do attract rainfall which nourishes the rest of the island.

The coast is tropical with higher temperatures in the south and west which are in closer proximity to Africa. Average summer temperatures are 35 degrees. General rainfall is usually confined to the November to January period.

Sicily lies in the CET (Central European Time zone), so it's an hour ahead of Greenwich mean time. Therefore an easy place to travel from most European countries.

There are many fine beaches in Sicily. Spiagge Dello Zingaro beach located within a nature reserve is stunning and highly reputed for diving. The coast between Capo Calava and Capo Schiano has an abundance of lovely sandy beaches, Spiaggia Dei Conigli (Rabbits beach) to the south-east of Lampedusa is reputed as one of the most beautiful beaches in the world. Vendicari has wide immaculate beaches set in a nature reserve; Balata Dei Turchi is one of the wildest and most isolated beaches on the island whilst the sea cove at Pollara is one of the most dramatic. There are much more.

Sicilian food constitutes one of Italy’s most varied cuisines. This is due to Sicily’s rich heritage and the fact that the island had a wealthy aristocracy who would dine extravagantly living alongside a poor peasant population who survived on subsistence food. You can find local fresh products such as swordfish, sardines, ricotta cheese, chillies, aubergines, olives, capers and almonds. If it's home cooking or eating out you enjoy there is an abundance of choice available. Local wines are very good too.

When you eat out in Sicily you can expect the food to be spicy, hot and sweet, much more so than on the mainland. All the typical Italian dishes are on offer, fish is predominantly on the menu, especially swordfish. Of course, you wouldn't be in Italy without pasta and Sicily is no exception, a speciality is a pasta sauce of pine nuts, capers and peppers along with sardines, known locally as Pasta con le sarde. Stuffed cannoli tubes are another favourite as are almond based desserts. The Sicilians are highly reputed chefs.

There are beautiful walks and plenty of watersports including sailing, windsurfing and scuba diving. There is a good range of sports and leisure activities in Sicily for all ages.

For a great shopping experience in Sicily, you need to head for Palermo where you will find something to suit all tastes. In the numerous villages and fishing ports, you will find interesting traditional products.

The big read for Sicily has to be the Godfather which is also a stunning film (2 actually) starring Marlon Brando and Al Pacino. On a lighter note, A house in Sicily by Daphne Phelps is hard to put down once you start. a recent novel, The Villa by Rosanna Ley is a perfect book to read whilst staying in a holiday villa in Sicily.

Films to see before a holiday in Sicily

The best-known film set in Sicily is the Godfather with Al Pacino and Marlon Brando, dark but very beautiful all the same. Cinema Paradiso is another Sicilian based classic which won an Oscar.

Sicily holiday homes what to expect

Our range of self-catering accommodation in Sicily comprises mainly bungalow and cottage style, modern houses, many with private swimming pools others are ideal beachside properties. There are a few luxury villas as well. Standards are high and interior decor very tasteful in our Sicilian houses. If you need help with your choice of villa use the knowledge of our experts.