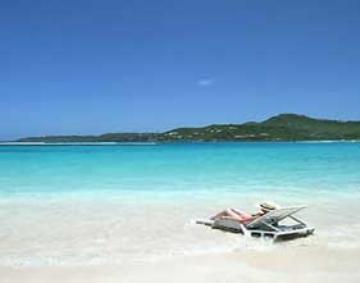 The beautiful island of Saint Barthelemy basks in the Caribbean sunshine 200 kilometres from Guadeloupe and 25 kilometres from Saint-Martin. The island was named after the brother of Christopher Columbus who first discovered it in 1493. The island is a French overseas community, though it draws most of its influence from the neighbouring American Virgin Islands.

There is one main town on the island, Gustavia, where most of the locals live and the majority of visitors stay. Scattered around the mountainous, dry island which peaks at 300 metres there are a number of small villages.

North of Gustavia at La Tourmente is the St Barts landing strip which finishes on the beach. Beyond is Saint-Jean, a seaside resort which is set on a gorgeous bay and has a number of shops, bars and restaurants. The Colombier bay to the west is one of the favourite mooring points for sailors.

There are a number of fabulous beaches on the island of Sant Barts such as the one at Anse des Cayes which is popular with surfers and the coconut lined sands of Anse des Flamands. Corossol is a delightful small fisherman's village which seems to be lost in time with its colourful boats and the traditionally clad ladies.

The best way to access St Barth from the UK is by flying with British Airways or a charter company to Antigua. From there is a flight with a company called Liat to St Martin Juliana International Airport and from there you take the St Barth Commuter to Saint Barthelemy airport Gustaf III (SDH).

Another way to get to St Barth from the UK is to pick up the Air France flight from Paris to Juliana in St Marteen. From Juliana to St Bart's you fly with St Barth Commuter.

With average temperatures of 27 degrees centigrade St Barths enjoys a beautiful climate year round. There is a rainy season between May and November though showers only tend to last for around 15 minutes.

St Barths is ill-suited to agriculture and fortunately, tight restrictions on buildings have prevented mass tourism taking hold and consequently, the island has become appreciated by discerning clients for its un-spoilt qualities.