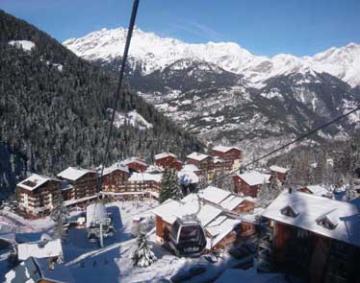 Apartments in Valfrejus, ski accommodation, self-catering rentals with access to fitness facilities and sauna for ski holidays in Valfrejus, France. Although a recent resort Valfrejus was thoughtfully developed with wooden faced chalet style residences so it has the feel of an authentic alpine village despite being very modern. Ranging from a one bedroom apartment for four people to a two bedroom for eight.

Valfrejus skiing
Set in the Maurienne Valley, close to the Italian border, Valfrejus is a small ski resort set at 1550 metres with the lifts rising to a maximum altitude of 2737 metres, giving a vertical drop of 1187 metres. There are some notable black runs amongst the available pistes which are serviced by 22 lifts. In all, there are 3 green, 6 red and 4 black runs covering 65 kilometres. 76 snow cannons ensure snow reliability.

There are a good ski school and a children's club as well as a creche, the main languages spoken being English, French and Dutch.

Valfrejus travel
Valfrejus is located around one hour and thirty-five minutes drive from Grenoble which has direct flights with either Easyjet, Fly Thomas Cook or Ryanair from Luton, Stanstead, Gatwick, Bristol, Liverpool, Birmingham and Manchester.

Valfrejus the resort
This is very much a family resort which is particularly good for beginners up on the 2200 metre plateau, though there is something for everyone. There are also cross country routes and snow shoe circuits. Most of the skiing is just above the tree line and there are plenty of off piste opportunities in what is really one vast snowfield.

From an apres ski point of view it is fairly quiet though there are some good restaurants and bars as well as a night club. There are a sports centre and an ice rink, you can even have a go at paragliding.