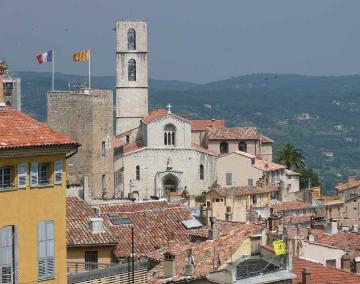 Grasse villas with pools, cottages to let, gites with pool, holiday rentals, luxury self catering houses for let for holidays in Grasse.

Our villas in Grasse are in the leafy outskirts of the town which is well serviced by a number of excellent hypermarkets and shops as well as clothes shops, cafes and restaurants, all given a little extra style due to frequent association with the towns perfume industry.

Grasse is a handsome, fascinating, small/medium sized town located in the French Riviera. It is a commune of the Alpes Maritimes department and is located at 350 metres, 20km inland from the coast at Cannes.

It is this unique location which allowed Grasse to establish itself as the perfume capital of the world. The climate in Grasse is close to perfect and ideal for growing flowers which were cultivated here from the 18th century and incorporated into perfumes which became renowned worldwide. Over 25 tons of Jasmine, a key perfume ingredient, are reportedly produced in Grasse each year and there is an annual festival to commemorate the plant, usually at the beginning of August, which is accompanies by musicians and general festivities.

Traveling to Grasse is really easy as there are numerous direct international flights to nearby Nice (NCE) airport 39km (around 32 minutes but depends a lot on traffic). There is an excellent road connection via a duel carriageway to the A8 motorway.

The climate is very warm and sunny, but being a little higher and back from the coast it is very pleasant, enjoying gentle breezes and less clammy evenings than resorts by the sea. There is also an abundance of water from the mountains behind and the Saigne canal, constructed in 1860 for the purpose of irrigation, makes sure it is well channeled.

The perfume industry and spin off aroma business such as Manne still thrive today and many of the big name perfumeries such as Fragonard, Molinard and Galimard are open to visitors who come from around the world to understand the subtleties of perfumes. There is also the Musee International de la Parfumerie which provides a broader perspective on aromas and scents. In the novel Perfume by Patrick Susking, Grasse is the setting of the final chapters. Grasse is both a tourist resort and a real working town. 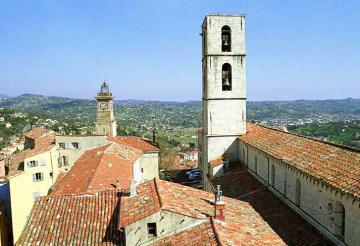 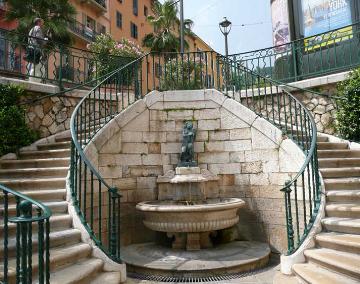 Grasse has an interesting old centre, which merits a short visit, built around the Sarecen tower and the cathedral (founded in the 11th century), its streets are mainly pedestrianised and link to various pretty squares which also accommodate the markets.

From Grasse it is easy to get to the coast at Cannes, Nice or Saint Raphael and Frejus which allows for a good variety of resorts, beaches and creeks. In the hills behind there is the magnificent Gorge du Loup and pretty hilltop villages such as, Gourdon, Saint Paul de Vence, Fayence and Vence. There is a handy train service from Grasse as well as regular buses to Nice. Just a short drive down the valley is Mougins which is excellent for dining out.

For the active there is plenty to do in the area including cycling, hiking, tennis (tennis club Plaine le Vignal) and riding (club Hippique de la Brague or Pony Club Ecole Equitation). There are numerous golf course including the Golf country club de Saint Donat and the Golf du Grande Bastide. Paracending and canyoning are also available. The nearby Lac de Saint Cassien is a great place to take the children for a day out.

From mid-May to mid June (varies according to season) the famous rose de Mai is picked. There are organised visits on Tuesdays at 10.00 and you can see and smell the unique roses which are the essential ingredients of perfumes like Chanel. To check visit arrangements call 06 12 18 02 69.